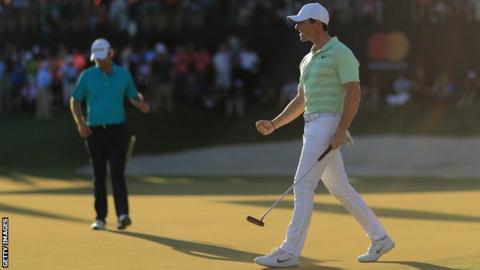 Rory McIlroy picked up his first victory since September 2016 as he won the Arnold Palmer Invitational.

The 28-year-old Northern Irishman carded an eight-under-par 64 to finish on 18 under, three ahead of Bryson DeChambeau at Bay Hill.

“I played a perfect round of golf,” McIlroy told Sky Sports.

England’s Justin Rose finished in third place on 14 under after he closed out with 67, while Tiger Woods was tied for fifth on 10 under.

Woods, an eight-time winner of the event, closed out the day with a round of 69 to end eight shots back.

McIlroy said: “It was awesome to feel the buzz of being somewhere around the lead going into the back nine and reeling off those four birdies in a row.

“I’ve missed it, I really have missed it, and to play the sort of golf that I played today under that pressure, I’m really proud of myself and just so happy to win.”

McIlroy’s last victory came on 25 September 2016, the day that Arnold Palmer died, and he paid tribute to the seven-time major winner.

He added: “It’s ironic to think that the last time I won was when Arnie passed away. To be able to create my own little piece of history on the 18th green here was pretty special.

“I’m just so happy to be back in the winner’s circle again and win a tournament that has Arnold Palmer’s name on it, someone that means so much to us in the game of golf.”

McIlroy, a four-time major winner, began the final round two shots adrift of Swedish overnight leader Henrik Stenson, but his bogey-free 64 was the lowest score of the day.

He opened his final round with five pars before making three birdies in the next four holes to turn at halfway on three under.

Three pars followed on the back nine before a crucial spell saw him birdie five of the last six holes including the par-four 18th.

DeChambeau, whose sole PGA Tour win came at the 2017 John Deere Classic, made an eagle on the par-five 16th to take him to within one of McIlroy.

But the Northern Irishman’s three on the final hole sealed his first win at Bay Hill as the American three-putted to bogey and finish three shots back.

Olympic champion Rose, who finished four behind McIlroy, was one ahead of Rio silver medallist Stenson.

McIlroy, who was outside of the world’s top 10 prior to this victory, will compete at next week’s World Golf Championship Match Play event at the Austin Country Club in Texas before heading to Augusta for the Masters the week after.