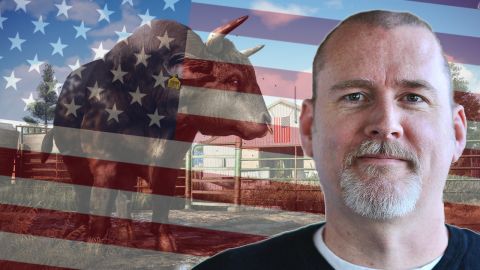 Remember the days when side missions were all about killing rats and collecting items? How times have changed. In 2018, Far Cry 5 players can stumble onto an optional mission that will have them hunting down fresh testicles for the local culinary celebration, Testy Festy. It involves guns, bulls, tractors, and the most surprising use of Marvin Gaye’s Sexual Healing since that awkward ninth grade biology lesson.

It sure came as a surprise in the game. Ten minutes before, I’d been reading a pretty emotional letter from a father to his daughter while I was checking out a prepper stash, and the local cult was still raging – but here I was attacking sexually aroused cattle with a flamethrower. Far Cry 5 feels more open than ever before, so the emotional and the crazy is all mixed into one massive cocktail. We spoke to the game’s executive producer Dan Hay about how the Testy Festy mission came about, and how the team at Ubisoft makes the shifts in tone work.

Hay says the key to creating a mission like Testy Festy is the one ingredient that can make or break a Tinder date. “That’s the thing that’s really tricky: injecting charm into it with something like the right song. Each character and story has a little idiosyncrasy to it.That’s the process, finding what it is that makes it weird and wonderful.”

And what about those shifts in tone? We got a few hours to play the game, and I spent a lot of that time drawn to the madder moments – but someone else might’ve spent that time just following the main mission. How does the team plan for players following their own whims rather than a storyline?

“The way I choose to think about it is like a piece of music,” says Hay. “In previous Far Crys, we were building a very specific piece of music; we knew where you were going to be at certain beats, so we knew what emotional state you would be in. With this game, we said ‘No – just provide unique notes and rests, and let the player choose what it is they’re going to do.’ It’s not prescriptive, it’s just about opportunities.

This wild experimentation is part of what keeps the Far Cry series so fresh. It’s an action game that has gone back to the Stone Age, had an ’80s-style spin-off, and let you ride elephants around Nepal. “One of the cool things about our brand is that we get to play,” says Hay. “It’s the same spirit that created Blood Dragon, or Far Cry 4; we said ‘OK, what about going back 12,000 years and doing something in prehistory’? Somebody says ‘What?!’ – and then we know it’s the right idea. As soon as somebody says ‘what’ we know we have to chase it.”