Greg Madson never liked the way he proposed to his wife Sherri back in 1981. The pair, who were then in their teens, had found out they were expecting their first child and Madson essentially asked for his bride’s hand by tossing her a ring. Five kids and nine grandchildren later, the couple is now facing Sherri’s terminal liver cancer together, and Madson decided it was time to for a do-over on his proposal. 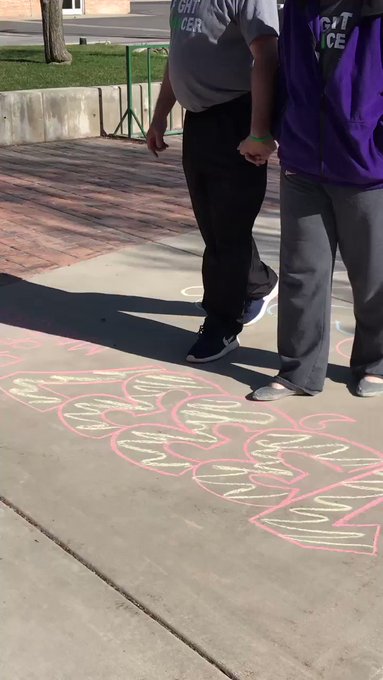 My mom has terminal liver cancer.

My dad never liked how he originally proposed to my mom back in 1981.

Tonight he decided to do it over again!

After consulting with his children, the family hatched a plan to get Sherri to a local park on Sunday, where one of their daughters and daughters-in-law had scrawled a special message in sidewalk chalk. With the Madson’s grandchildren in hiding places, their son, Jason, started recording the pair as they walked past the message.

“If by chance I ask you to marry me again, would you?” he asked.

After initially saying no a few times through a big smile, Sherri gave Madson the answer he was hoping for.

“She said ‘Yes, you big idiot,’” he announced to his family.

The Madson’s grandchildren, who were decked out in superhero costumes and special “beat cancer” t-shirts then ran around blowing bubbles on the happy couple.

Madson’s son Jason, who shared the video on his Twitter account, said that Sherri’s cancer is aggressive, and she may only have a few months left to live, so they are grateful for the chance to make these memories.

“Not everybody gets a do-over, and I imagine there’s a lot of people who have lost loved ones to sudden, or unexpected things,” he told Fox News. “So I suppose it’s a blessing – to have a chance to make new memories, or amends, or fix something that you may regret, or however you want to word it, so we’re very grateful for that.”