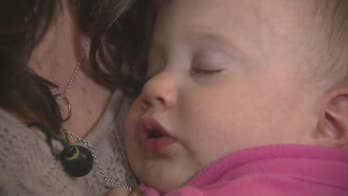 An Indiana cop jumped into action to save a toddler choking on an apple at a Chick-fil-A — his first work as a paid police officer.

Hobart Police Officer Richard Mayer was dining at the fast food restaurant in Merrillville with a few of his colleagues when Melanie Hasse ran to him for help, WLS reported. Hasse told the news station her daughter Charlotte choked on a piece of apple.

“I looked over and she started gagging. I could see something kind of in the back of her throat, mistakenly reached in to try to grab it out, I think that pushed it back into her throat,” Hasse recalled.

Mayer said the worried mother “came running over” to him about her choking daughter and he immediately sprang into action.

“I grabbed her and Officer Ramos to my right flipped her over, we did back slaps on her and got food dislodged from her throat right away,” Mayer said, adding that the incident “caught us all off guard.”

The piece of fruit dislodged from the toddler’s throat, allowing oxygen back into her body, WLS reported.

Mayer revealed saving the toddler was his first act as a paid police officer.

“This is what he was meant to do,” Hasse said. “To save lives in some kind of way.”