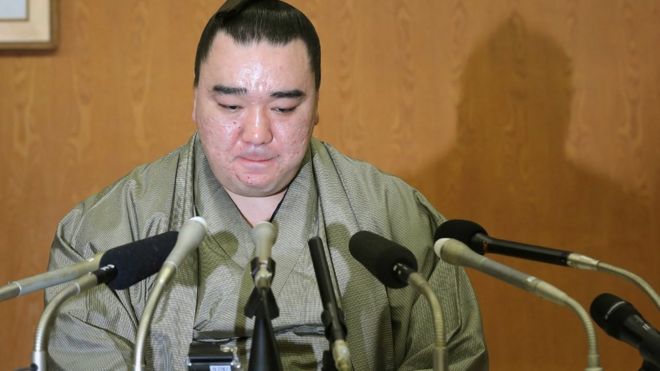 The 33-year-old wrestler from Mongolia admitted hitting a junior wrestler over the head with a karaoke machine remote control during a night out in Tottori in October.

He has already apologised and stepped down over the incident.

The case rocked the world of sumo, a hugely popular ceremonial sport.

The assault on fellow Mongolian Takanoiwa happened while they were out drinking with other wrestlers in a bar in the western city.

The grand champion is reported to have been angered that his countryman was checking his phone while being given advice, seeing it as showing a lack of respect.

The latter was admitted to hospital with concussion and a fractured skull.

Two others involved in the incident have faced disciplinary action and Takanoiwa’s stablemaster – as coaches are known – has been demoted for allegedly delaying reporting the incident.

Harumafuji started his career in Japan at the age of 16 and was promoted to grand champion or yokozuna – sumo’s highest rank – in 2012.

He released a statement in late December, Reuters news agency reports, saying his life “is now set to be sharply different from what I thought it would be”.

“I have a feeling of chagrin, to be honest. But the responsibility is all mine.”

How does sumo wrestling work?

What other scandals clouded the sport recently?