John Galliano On Going Back To His Roots 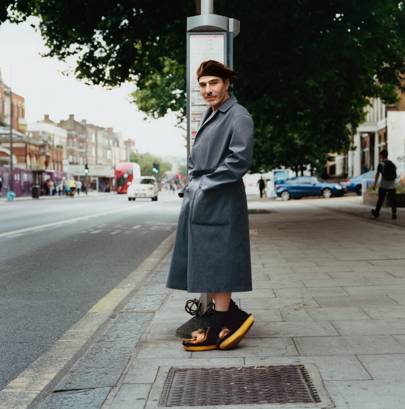 John Galliano briefly boards the number 12 to Oxford Circus, and a passenger’s jaw literally drops. With his otherworldly air, the elusive Maison Maison Margiela designer is the last person you’d expect to see at an Elephant and Castle bus stop on a rainy afternoon.

“They’re so luxurious now,” he observes, gawping at the spacious buses that replaced the trusty Routemasters of his childhood. “You’d leave home quite normal-looking, with a bag, and start getting dressed on the bus, putting on your spot cover-up, glossing up the lips, brushing up that wedge,” he quips. On our way to the shoot, he’s been watching his formative years pass by from the car window. “I don’t remember any of these little things. It’s completely changed, hasn’t it?” The Heygate Street bus stop was young Galliano’s portal to the escapism of the West End as a teenager growing up in southeast London in the 1970s. He even had his first kiss here. “When you got to the Elephant,” he explains, “it was like crossing a frontier to a glamorous new world.”

He’d take the 12 or 68 here, then get the Tube into town. “Pubs in Soho had sawdust on the floor…” He stops himself. “I’m really sounding about 100, aren’t I? But they did! There were girls in raincoats modelling upstairs. It’s not what it is today,” the 56-year-old shrugs. Galliano felt at home in Soho’s theatrical nightlife, worlds away from the part of town where he’d spent his childhood. “The real you starts coming out. The you you’re not always allowed to show.” If he missed the last bus, he’d have no choice but to walk home to Peckham in the middle of the night, down the Old Kent Road and Lordship Lane, in his fantastical outfits. “When you’re young you’re fearless, aren’t you? Someone guides us safely home.” He’s lived in Paris for decades now, but Galliano’s accent still bears traces of his south London roots, although his diction – courtesy of his early education at Wilson’s School for Boys in Camberwell – has made it more palatial than Peckham. “It isn’t now, but it was really very rough,” he says of his childhood area. “Loved it.”

Galliano was six when his family relocated from sunny Gibraltar to southeast London, and the multicultural melting pot would forge the foundation for his sensory view of fashion. Since he started interpreting Maison Margiela’s trademark deconstruction in 2015, his collections have reflected a make-do-and-mend attitude close to his early fashion efforts. “To make yourself look original you customised things. That’s a very south London thing,” he explains. Early design experimentations included an old Levi’s denim jacket from a charity shop, on to which Galliano zigzag-stitched playing cards with bright-coloured thread. As a teenager he’d shop his way through the area: Coldharbour Lane, Brixton market and East Lane. “It was really good there, because you’d get knock-offs.” His bedroom had a rotation of posters on the walls, from the Bay City Rollers, Slade and Marc Bolan to Bruce Lee.

As a Central Saint Martins student in the early 1980s, he moved to Mornington Crescent, got into Bodymap and Boy George, hung out with Steve Strange and Rusty Egan, and went clubbing at Embassy and Taboo. “I graduated in 1984, the Thatcher years – your back up against the wall, no grants. You became really creative with the means you had. That was the period when all that deconstruction was actually happening for real in London, but we didn’t know.” When Galliano finally got his first grant, he blew it on a Claude Montana trench coat from Browns. “A sheepskin collar, a few little studs – I chose very wisely. You don’t really think any further than the next day when you’re that age.”