Police in DeKalb County, Ga., are currently searching for a McDonald’s guest who was interested in more than just a Big Mac.

Shortly before midnight on Jan. 2, a McDonald’s in Decatur was burglarized by an armed robber who climbed through the drive-thru window and made off with an entire cash register, according to DeKalb County Police Department.

In surveillance footage recently released by the DeKalb police, the suspect can be seen running up behind a row of cars at the drive-thru before approaching the window and pointing a gun at the McDonald’s employee on the other side. He then attempts to grab the drive-thru operator by her shirt, but when she evades his grasp and runs away screaming, the gunman decides to climb through the window himself.

The gunman attempted to grab the drive-thru employee, who quickly ran away.  (DeKalb County Police Department)

“This subject decided this was a better way to do it,” DeKalb police Lt. Lonzy Robertson told WSB-TV Atlanta. “He was small enough to get through the window at the time.”

The suspect briefly gives chase after the employee, demanding she “open the register.” When she doesn’t comply, he proceeds to rip the register from her station before escaping back through the drive-thru window.

After climbing through the drive-thru, the masked gunman escaped with a cash register.  (DeKalb County Police Department)

Customers waiting in line inside the McDonald’s reportedly fled the restaurant, as did a car waiting for their order outside.

“I hope they get him,” said Ju Washington, a witness who spoke with WSB-TV. “They need to get him. There could have been kids in the car. Anybody could have gotten shot.”

Police are currently seeking the public’s help in identifying the robber. Anyone with information is encouraged to call the department at 404-286-7900. 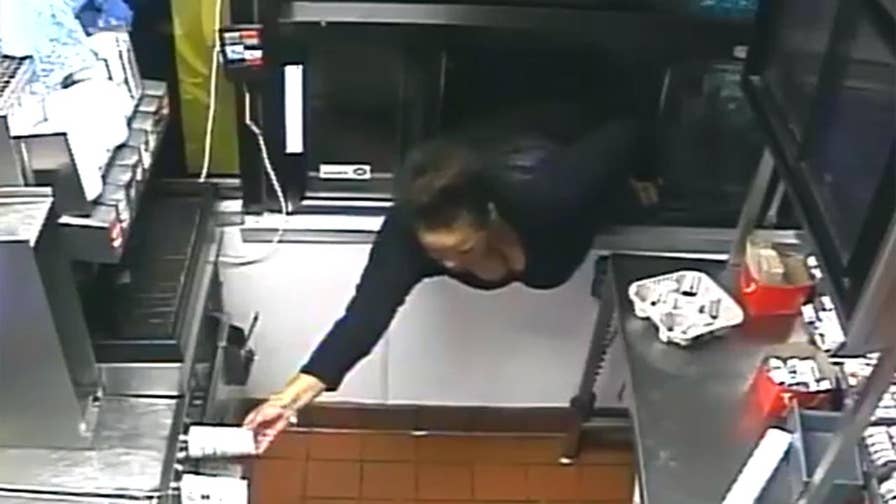