Could you pull off this feat?

A North Carolina teenager recently announced she had been accepted into 113 colleges, WFMY reports.

“When I got the first couple in the mail, I was like, ‘Oh wow, this is really happening,’” Jasmine Harrison, 17, told the news station. “I didn’t really think I’d be able to do that by myself.”

The teenager — a student with The Academy at Smith — was also “awarded more than $4.5 million in merit-based scholarships,” WFMY added.

The cost to apply to the dozens of schools reportedly totaled $135, thanks to assistance from the teen’s mom and school staff. 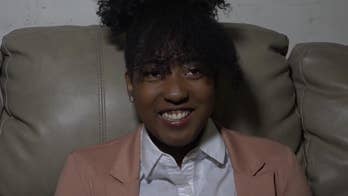 She also applied to more than 50 historically black colleges and universities via the Common Black College Application.

“On those late nights when I was filling out those applications with my mom and we just felt like we cannot do this, we just ended up singing gospel songs together to get through the night,” Harrison confided.

The school she picked: Bennett College in Greensboro. It’s one of three that reportedly offered a full ride.

Harrison didn’t get into every school she applied to, however.

The New York Times reports that the high school senior was rejected by Seton Hall University and the University of South Carolina.

Did teacher of the year send Trump ...