Six months after Mexico quake some still camp outside homes

Under a patchwork shelter of overlapping tarps and repurposed vinyl advertisements, several dozen residents of 18 Independence Street pack cheek by jowl into donated tents in the street near their building, which was damaged in the Sept. 19 earthquake. Six months after the temblor, improvised camps like this one erected by displaced residents are among the most visible signs that not everyone has moved on from the earthquake that killed 228 people in Mexico City and 141 more elsewhere.

Mexico City Reconstruction Commissioner Edgar Oswaldo Tungui Rodriguez said there are 27 such camps around the capital, but denied that people were living in any of them. Rather, he said, quake victims had just posted guards to watch over their property. 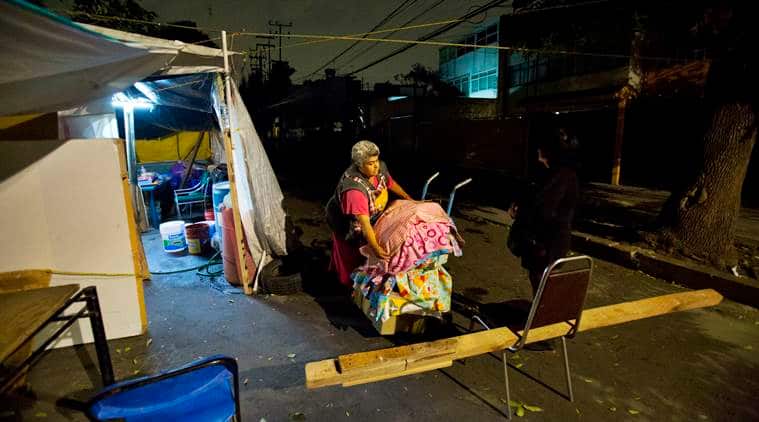 In this March 14, 2018 photo, vendor Maria Patricia Rodriguez Gonzalez packs up her wares to bring them in for the night, at the tent camp where she has been living with her family for the last six months, outside her earthquake-damaged residence at Independencia 18 in Mexico City. (AP Photo/Rebecca Blackwell)

Maria Patricia Rodriguez Gonzalez has been living under tarps on the sidewalk near the Independence Street building with her 13-year-old son and 27-year old daughter for the past six months. The residents are still allowed to enter the building, but nobody risks staying there.

The bedroom floor in Rodriguez’s apartment has sunk since the earthquake. The ceiling sags and plaster has fallen from the walls. Afraid to use the bathroom there, she heats water on a gas burner under the tarps and manages a sort of bath inside a portable toilet on the sidewalk.

At first, Rodriguez and other residents say, there was a lot of solidarity in the neighborhood. Some neighbors let them use their bathrooms and shared food after the magnitude 7.1 quake. But as the days turned to weeks and then to months, sentiments shifted.

People have stolen the gas tanks they use to heat food. Cars have come close to driving through the camp. Some neighbors have stopped speaking to them, others hurl insults.

“It makes us sad that people insult us without knowing the reality we are living,” Rodriguez said. “We’re not here because we want to be. We’re here out of necessity.” 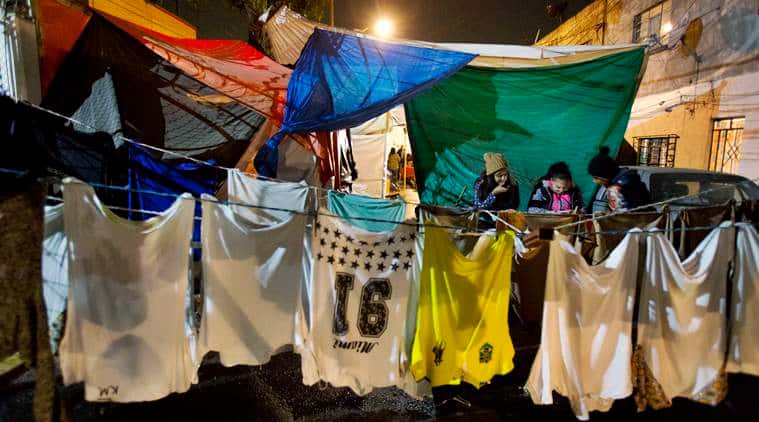 In this Jan. 12, 2018 photo, clothing hangs to dry in a tent camp where teenagers pass the time looking at a cell phone outside the earthquake-damaged Independencia 18 residence at night in Mexico City. (AP Photo/Rebecca Blackwell)

Displaced residents received 3,000 pesos ($160) each month for the first three months from the government. The idea was that they would rent apartments elsewhere. But residents say that was not enough to rent apartments in their neighborhood and they fear that without their presence, looters will clear out their possessions. Many residents had lived in the building’s 37 units for more than 30 years.

Rodriguez tries to make ends meet by selling candy on a table at the entrance to her camp. She had sold candy out of her ground floor apartment before the earthquake. Others go off to jobs during the day while a few of the building’s older women look after the others’ young children.

Most everyone has a cough and especially the children are often battling colds, said resident Emma Alvarez Lopez, who helps look after children. Her own granddaughter eventually had to leave the camp after contracting pneumonia. “If we go, we’ll practically be abandoning the building,” Alvarez said. “We have to somehow pressure the government to support us.” For now, they await an official determination from the city about their building. Most believe it will need to be torn down. 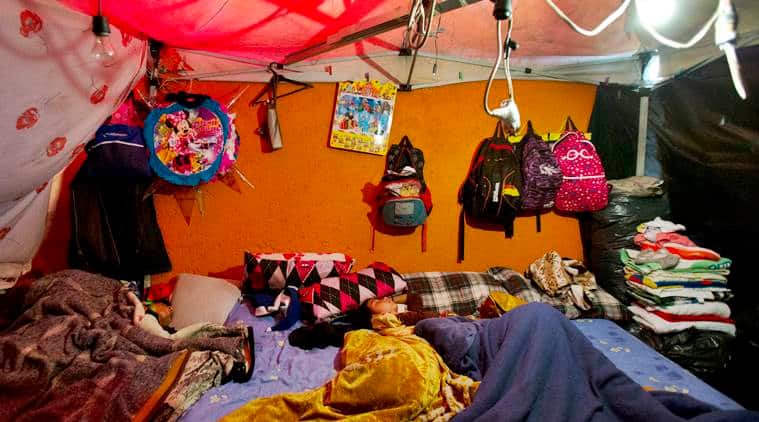 In this Jan. 5, 2018 photo, children sleep in a shelter built against the external wall of a house, in a tent camp outside earthquake-damaged Independencia 18 in Mexico City. (AP Photo/Rebecca Blackwell)

Tungui, the reconstruction commissioner, said in written responses to questions that city officials so far have determined what to do with 757 structures out of 911 on a list of damaged buildings compiled by an emergency committee. Some will be demolished, others repaired or reinforced. So far the city has demolished 28 buildings and is currently working on 15 others, he said.

The city announced last week that it had taken ownership of a lot where an office building collapsed, killing 49 people. It plans to convert it into a memorial to victims of the earthquake.

Meant no disrespect to any individual or ...