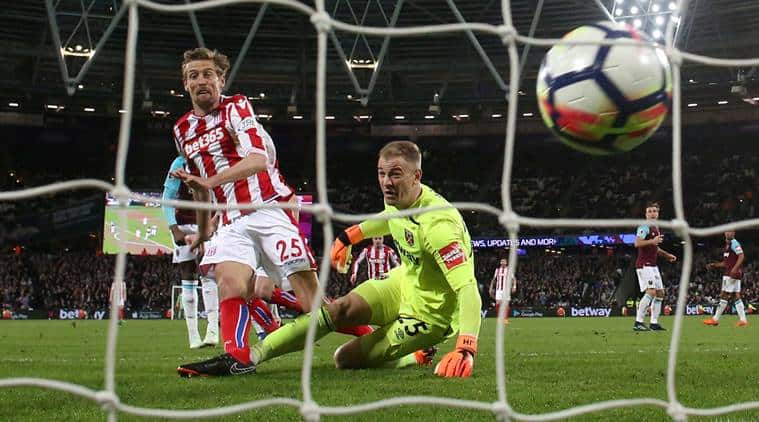 West Ham United substitute Andy Carroll netted a late equaliser to snatch a 1-1 draw at home to Stoke City on Monday that moved the Londoners a step closer to Premier League safety and left the visitors facing the drop.

Stoke thought they had secured all three points and their first away win since October when substitute Peter Crouch knocked a loose ball into the back of the net after West Ham’s England goalkeeper Joe Hart spilled a shot after 79 minutes.

But West Ham showed all their fighting qualities as they rescued a point in added time when Carroll volleyed a cross from Aaron Cresswell past Jack Butland into the corner of the net.

West Ham will count themselves unlucky not to have won after having three goals disallowed in the second half, but the victory means they now stand seven points clear of the bottom three, while Stoke are five points adrift of the safety zone.

“I thought we played well throughout,” said Carroll. “Obviously Crouchy came on and scored, which is what he does best, and it was disappointing for us because we’d had a few chances and a couple of goals disallowed.

“We took points off them, though, and it’s a point for us, so it’s a good result in the end.”

Disappointed Stoke manager Paul Lambert refused to give up the battle to beat relegation, saying: “I still think we need three wins. If we can get a little break on Sunday against Burnley, we’re certainly in with a fight.”

CONFIDENT MOOD
After West Ham’s crucial home win over Southampton and a well-earned point at Chelsea, David Moyes’ side were in confident mood and could have broken the deadlock after 55 minutes when former Stoke forward Marko Arnautovic directed a powerful header past Butland but was given offside.

The Hammers were denied a goal once again after 67 minutes when Edimilson Fernandes struck a powerful shot that flew past Butland but his effort was also ruled out, with Arnautovic standing right in front of the unsighted Stoke keeper.

Stoke opened the scoring after a moment to forget for World Cup hopeful Hart in front of watching England manager Gareth Southgate as he failed to hold a shot from Xherdan Shaqiri and Crouch was in the right place to convert from close-range.

But West Ham refused to lie down and Carroll, missing for the last 13 games through injury, showed his quality when Cresswell delivered a perfect ball into his path and the former Liverpool forward fired an unstoppable volley past Butland.

West Ham were again denied by the linesman’s flag moments later when Javier Hernandez struck the ball past Butland, but Carroll was adjudged to have handled inside the area.

“I tried to bring the ball down and it hits my hand a little bit,” said Carroll. “If it’s a shove in the back, it’s a penalty, but we played on and he (referee Michael Oliver) didn’t give it and, in the end, it’s a point, so we’ll take it.”

Stoke City manager Paul Lambert had nothing but praise for his team despite conceding an added-time equaliser and was convinced they could still produce a great escape to maintain their Premier League status.

Despite dropping two crucial points, Lambert said he still took a number of positives from the result and felt his team would stand a fighting chance of beating the drop if they beat Burnley at home on Sunday.

“I thought we deserved something. I thought we played a really good game and if we keep playing like that, we will win games,” Lambert told a post-match news conference.

“But we have been playing really well of late. I keep saying it – if there is a little bit of Lady Luck, it has certainly not come our way. But performance-wise it was very good.

“I think if the team had been playing this way from August, I wouldn’t be here and they wouldn’t be in the position they are in. West Ham turned over Stoke a few months ago. They are still looking for points as well. With the atmosphere in stadium, it is a difficult place to come but I thought we were excellent.”

“If we can do that (beat Burnley), it will set the cat right among the pigeons,” said Lambert. “We’e playing well, we have an incredible support behind us, and I’m pretty sure come Sunday, there won’t be many stadiums rocking the way ours can rock.

“If the supporters do what I think they’ll do, we just have to turn up and try and get a win. Regardless of how we do it, we have to get a win but we certainly will drag teams into it.”

West Ham had three efforts ruled out after Marko Arnautovic was twice offside and Carroll handled inside the box but Lambert said his team were due a bit of luck and felt they deserved to come away from east London with a point.

He added: “I must have walked under a ladder or broken a mirror somewhere because I have not had any luck whatsoever.

West Ham United manager David Moyes said he was surprised by Hart’s mistake that handed Stoke the opening goal but he defended the England player after his side had to settle for a point.

Hart was outstanding in the Hammers previous game against Chelsea and earned a man of the match display as his side came away with a crucial point in a draw at Stamford Bridge.

The West Ham keeper would have been desperate to impress once again ahead of the World Cup, with England manager Gareth Southgate watching from the stands, but he produced a major error which led to Stoke scoring after 79 minutes.

“He had two very similar shots in the first half and he took them quite comfortably in his midriff. So it was a surprise that it spilt out. But, look, if you’re a goalkeeper it’s going to happen,” Moyes told a post-match news conference.

“For the team, for us, at the time it was difficult because it meant we had to go and look to change after we had been the dominant team, apart from the first five or 10 minutes of the second half.

“Last week after he made fantastic saves at Chelsea, I said to him: ‘Well done’. I didn’t go over the top because I expect him to do that. Tonight I’ll tell him: ‘You should have done better on that one.’

“I think the points we’ve taken in recent weeks have been really important, winning here against Southampton (3-0) and taking a point at Chelsea (1-1). I think the important thing was to make sure we didn’t lose tonight.

“I thought the players showed the commitment and energy to make sure that didn’t happen, and their play throughout was one of the better performances we’ve had since I’ve been here.

“I think if you get to 40 (points) then you are going to be close. I think the target has always got to be that. If we have 40 I think it’s a lot to ask the teams below us to get it.”

Moyes had nothing but praise for former Liverpool striker Carroll after he made an immediate impact as a substitute after being sidelined since January with an ankle injury.

Moyes added: “He’s been training since we were in Miami. He’s had a couple of weeks of running and bits of stuff.

“I don’t know if we’re going, in this short period of time left, to get him up to 90 minutes. But if he can continue to come off the bench and give us 20 or 30 minutes, that will be more than handy as he showed tonight.”

Moyes was disappointed to see three efforts ruled out for offside but felt the third one surrounding Carroll, when he handled inside the area, could have gone in his side’s favour.

“I haven’t seen the last one which seems to be the most dubious of them all. I think the referee got the (others) right.”